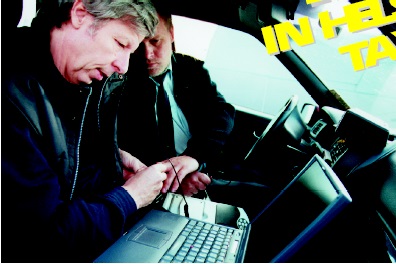 We referred to the Lahti taxi test in our last issue. The article aroused the interest of some “ordinary” taxi drivers who were also willing to take the test. Even “ordinary” taxis are nowadays equipped with a large number of electrical devices which cause various symptoms in the drivers. The test was done on Tuesday, the 15th of May.

Friedrich Bauer visited the Finlandia House last February introducing Green 8 products. He is holding a P.S.T.25 in his hand. This device is kept, for example, in the fridge to keep the food in good condition. On the table in front, a P.S.T.23 for telephone nets in particular.cars, 9 cm in diameter, and a P.S.T.28, the largest of the products. According to tests,the latter forms an even 66-metre-range protective field against stress effects of mobile.

The test was done in Tervasaari, which seemed a peaceful enough area with no extra link towers or other transmitters in the proximity. The driver, Stefan Jakobsson, was first out of the range of his car for about half an hour. He had Green 8 in his pocket to ensure “clean” initial values measured by David Furlong with his Best equipment. Next Stefan sat down in his car without Green 8 and spent some time there with all the electrical devices ready for use. David took the new values.

P.S.T. 23 was placed under the carpet and new values taken after the lapse of a couple of minutes. The last values were taken after about 10 minutes. The results can be seen in the table below. The initial and final values exactly the same, but the value is only two units lower than in the Lahti test. In Lahti even the initial value was “on the red”, which probably is due to too short an interval between leaving the and measuring the first values. Furthermore, no Green was used in the Lahti test to balance the energies. The results show clearly that the driver’s profession is quite stressing without any kind of protection, which could be P.S.T. 23, for example.