Well, there are no coincidences. Things supporting each other just happen, like from a big scenario. All spring long,David Furlong has used the Best Systems equipment to test the effects the mobile phone on various persons with and without Green 8. The stress values have clearly been above normal while using the phone or keeping it ready for use in the pocket. Green 8 has worked wonders in removing these stress reactions completely. It is, of course, true that all radiation from the phones, links, electricity lines, computers etc. cannot be completely removed, because in that case, least according to present knowledge, the apparatuses would simply stop functioning.

In our last issue, I already told about our research with Green 8, a small celluloid flake. The results were amazing. According to Best Systems equipment the stress symptoms caused by the mobile phone disappeared completely if the phone was protected by Green 8. We have also had excellent feedback from users. Many  symptoms have vanished.

The first taxi system in the world based on satellite location is in Lahti, about 100 kilometres from Helsinki. According to Friedrich Bauer, a taxi equipped in such way is a really unhealthy place for people, because they will actually be sitting inside a strong electromagnetic apparatus. We decided to test the bigger Green 8 product, its effects on the driver and the passengers. So we drove to Lahti with David Furlong, ordered a taxi and persuaded the driver to take a test in which we wanted demonstrate the effects of  the satellite technique on both the driver and the passenger and naturally also the effect Green 8, model P.S.T.23, on the test results.

Isto Liukkonen, the taxi driver told us that when the satellite technique was at the planning stage he had already pondered what effects it might have on the driver. He had had certain doubts about which, however, he had forgotten in the course of the project. 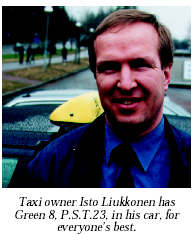 • Driver in the café nearby for about 15 minutes, after which the stress values of the body were measured with Best Systems equipment.

• Driver in the car with satellite equipment ready for use, new values.

• P.S.T 23 is placed under the carpet, new values in a couple of minutes.

• New values in about 10 minutes after the placement of P.S.T 23. The same test was also done to a passenger (author of the article).

• Initial value taken in the same area before the arrival of the taxi.

• Value in about 10 minutes after the placement of P.S.T. 23.
In diameter, According to research tests, it gives a 4-metre-range protection. 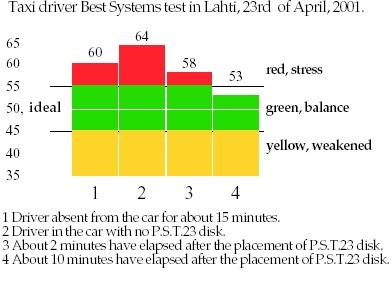 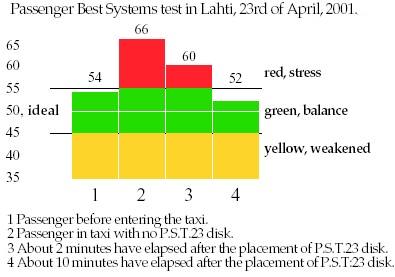 Testing in drizzling rain in Lahti. The Best Systems equipment used in the test had enough room on the back seat of the car. P.S.T. 23-disk is not big, only about 9 cmThe results can be seen in the tables below. They were very clear. The low initial value of the driver is probably due to the short absence from the range of the satellite equipment. It can, however, be seen that P.S.T. 23 dropped the stress values to nearly ideal level in about 10 minutes. On the ground of the test, it seems that the new satellite technique presents quite a risk to professional taxi drivers. And they are not the only group at risk. Satellite location is becoming more and more common also among truck drivers. Fortunately the situation can be easily corrected.

The “eight” on this model is copper-coloured but belongs to the same Green 8 product family.