Finland is probably the most skeptical country when it comes to the disadvantages of the mobile phone, the most sacred object of today. Nokia is the safeguard of the country and everything that is likely to jeopardize its position is rejected most systematically. Recently, however, the ill – effects of the cell phone have been discussed even on TV. All radiation cannot be removed, but what about the harmful effects?

The central point of contention is the electromagnetic radiation emanating from the mobile phone. In international surveys Nokia ranks among the best, but still the amount of radiation is dangerous at least to those using the phone frequently. England is planning to set an age limit for the use of the mobile phone. In my opinion, limitations of use will not be necessary if the harmful effects can be minimized. Is there a way to remove the electromagnetic radiation? There are many kinds of protecting systems developed here and there, and some people even tie crystals to their phones to protect themselves against the microwaves heating the brain. So far the but-ton earphone has been   considered the safest form of headset.  I have had one too, for some time but if often hap-pens that I forget to carry it with me. 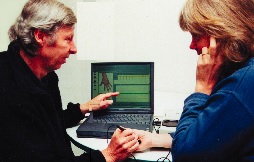 For the first time I bumped into Green 8 in Istanbul Turkey. There was a workshop for doctors and professors from all over the world, mostly following the research work on certain water pro-ducts. The workshop also introduced a simple-looking small laminate flake with a printed green figure eight inside made from material I didn’t recognize. We were told that placing the flake inside a mobile phone removed the hazardous radiation. It seemed an impossible thing to believe. Bauer Biotec, a German company collaborating with the Turkish-American Perfect Science, made the invention. I was told that negotiations with some telephone companies in Turkey, Japan and the USA about large batches were under way. My interest was aroused but at the time I took no further measures.

A couple of weeks before Mina Olen multi event in Finlandia House the founder of Bauer Biotec, Friedrich Bauer called me from Germany and said he was willing to participate in the multi event. He sent me some material about their products and my curiosity was aroused again. In addition to the ray protection to be installed in the mobile phone, the product collection includes a   number   of   other   products :   a   small

radiation protection, protection against satellite location equipment for example for the car, protection against radiation from television and computer screens etc. A really large selection of protective devices against different kinds of electromagnetic pollutants. He also sent me research material. The Austrian Institute of Potential Research in Vienna had done research work on Green 8 products under the supervision of their manager Irene Krafka from the end of 1999 till April 2000.

According to documentation, the results were amazing: Green 8 completely removed the effects of harmful radiation on man. And particularly on man (naturally on other living beings too), for the research was done via man. In some cases Green 8 even imp-roved the initial reading. In these instances, there may have been another radiation source in the vicinity (a relay antenna, for instance). Green 8 removed its radiation effects as well.

The equipment used in research was Prognos apparatus developed by Russians and used by them for 20 years in examining the health conditions and changes of astronauts before the appearance of physical symptoms. The Prognos research uses traditional Chinese meridians with the 24 end and starting points of twelve meridian pairs. The phone used in the research was Nokia 8810.

The research results are also available for order in 4 color copies at 180 marks price. The same can also be viewed on Mina Olen home pages at www.minaolen.com